Developed for shooters who favor the handling characteristics of a larger-frame handgun as well as a greater cartridge capacity, the STR-9F stands on the shoulders of the original STR-9 mid-size pistol—an all-business defensive pistol noted for its high impact performance and surprisingly low price point.

The new striker-fired STR-9F boasts an overall length of 7.95 inches and a 4.68-inch barrel length. The extended sight radius combines with the STR-9F’s precision barrel and Nitride-treated machined slide assembly to deliver the kind of accuracy shooters would expect from handguns priced twice as much. Overall weight is an easily managed 26.4 ounces.

Ergonomics score high marks courtesy of the STR-9’s black polymer frame. The contoured grip with finger grooves and the aggressive stippling patches ensure a comfortable grip for quick sight alignment and easy follow-up shots. Ambidextrous thumb-index recesses and left- or right-side magazine release positioning deliver optimal control for both right- and left-hand shooters. Adding to decisive operational control are robust serrations along the front and back of the slide, making the assembly easy to manipulate in inclement weather or when wearing gloves.

Feeding the STR-9F (#31752) is a 17-round double-stack magazine. Secure one round in the chamber for a total of 18 rounds of onboard firepower. The STR-9F is also available with a 10-round magazine (#31762) for state-specific compliance. Additional features include an integrated accessory rail, a tactile loaded chamber indicator atop the slide, and white three-dot sights.

The STR-9F is built for the discerning shooter demanding a reliable, durable, and accurate handgun at a price that works with any budget. MSRP for both the 17+1 and 10+1 models is $329.

Established in 1924, Stoeger Industries is headquartered in Accokeek, Maryland, and manufactures a full line of semi-auto, pump, side-by-side, and over-and-under shotguns for hunting, sporting clays, and personal defense, along with a complete line of airguns. In 2019 Stoeger entered the handgun market by launching the STR-9 series of semi-auto pistols. The company uses innovative technology and proven engineering and manufacturing techniques to deliver reliable, high-quality products to consumers with an industry-leading performance-to-price ratio. Stoeger Industries stands behind its products with a 5-Year Warranty.

Back to Press Releases

Stoeger is pleased to announce an optic-ready option to its STR-9C Compact 9mm line. 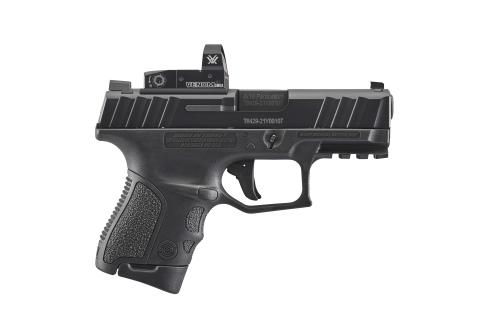 Announcing the new release of STR-9SC Sub-Compact and Sub-Compact Optic-Ready models.
Find a Stoeger Dealer
Get The Latest on Stoeger
Follow Us On Social